In recent years, food tourism has been defined by a single phrase: “Eat like a local.” The gold standard of a good vacation is no longer to hit all the famous monuments, or even to blow a lot of money on a restaurant with multiple Michelin stars. It’s about finding […]

In recent years, food tourism has been defined by a single phrase: “Eat like a local.”

The gold standard of a good vacation is no longer to hit all the famous monuments, or even to blow a lot of money on a restaurant with multiple Michelin stars. It’s about finding the chaat wallah in a specific alleyway who serves Mumbai’s best bhel puri; the superlative noodle stall in Singapore in a sea of food vendors; the doubles in Tobago sold out of an unmarked van in a parking lot. People don’t want to just vacation to a city; they want to feel like they live in that city—and a great way to do that is through food.

To meet this demand, a different sort of food tour has popped up. The leaders of these tours are true locals, showing tourists how they eat. But the dynamic can be difficult. Visitors bring with them misconceptions and biases, and some local guides, as much as they want to show an authentic, unfiltered version of their city’s food scene and tell more interesting, personal stories, find their “eat like a local” mission to be a lot more complicated.

Mariana Gómez Rubio, who runs tours in Mexico City for the local food tour company, Club Tengo Hambre, attended culinary school in Monterrey, and realized that many of these educational programs across the country were “not very detailed on Mexican cuisine, and the very complex, traditional preparations and ingredients,” she says. She wanted to show people the highly specific nature of Mexican food—how even a tortilla recipe can vary from family to family.


While conducting her own tours, taking visitors to Centro Historico to eat chile relleno tacos and huitlacoche and flor de calabaza quesadillas, she has run into others led by non-native guides relaying inaccurate information about dishes (she doesn’t correct them). “You see that more and more often with Airbnb experiences,” an activities platform by the popular vacation rental company that’s become widespread in Mexico City, she says. “But what we do is very different. We are very interested in creating a community.”

Similarly, in Jamaica, where many tourists stay in all-inclusive resorts with breakfast buffets and bottomless cocktails, sisters Anne and Janet Crick noticed that this experience of Jamaican food wasn’t actually all that Jamaican. That’s why they started Jamaica Culinary Tours in 2013.

The resorts try “to replicate the street food experiences in the context of the hotel,” Anne says. “But they aren’t quite authentic.” The flavors are significantly toned down. The curry goat isn’t that spicy. Hotels also rarely explain to guests the historical underpinnings of dishes, like how many of them are the provenance of enslaved people who had to be resourceful in order to feed themselves.

Honolulu-based Lanai Tabura, who runs Aloha Plate Food Tours, feels he is actively fighting against decades of misrepresentation of his cuisine.

He says that 95 percent of the people who come on his tour don’t understand what Hawaiian and Hawaiian-style food really are. He points to all the fast casual poke restaurants and chains like L&L Hawaiian Barbecue that have propagated a very toned-down version of the cuisine. During his tours, he is constantly quizzing his guests about the food history of Hawaii: how ingredients like rice and spam aren’t actually Hawaiian, and how dishes like malasadas and tempura found their way to the island.

In general, he says, his guests are open-minded—they are well traveled, cultured, and up for anything.

But they have certain expectations, like poke and spam musubi. Some have asked Tabura if they’ll be attending a luau. “I say no one is having a party,” he says. “I try to keep it as real as possible.”

The majority of guides interviewed said their customers are primarily white and western, and, even if unintentionally, bring certain biases.


Rubio recalls hosting a group from Australia, who was opening a quesadilla restaurant in Perth and doing research in Mexico. She took them to eat a quesadilla. “They were like, ‘What is this?’” she recalls. “And I was like, ‘This is a quesadilla,’ and they were like, ‘No.’ They had never tried a real quesadilla.”

Jacqueline Orange, who runs Taste Harlem, a tour that combines food with culture and history, said she was told by a member of one of her tour groups: “Oh, my parents are so nervous I was coming to Harlem, because they think they are going to get killed if they come up here.”

Even among those who have read up on restaurants in Harlem before taking the tour, Orange says many are only interested in those few spots that have gotten outsized attention in the media. “People are like, ‘I gotta go to Sylvia’s,’” a decades-old soul food institution. “There are places other than Sylvia’s. We could get a soul food experience somewhere else. Isn’t a food tour about exploring the uniqueness of places?”

Guides are also torn between whether the food that’s beloved in their city will be appealing to a non-local, often skipping or providing warnings for certain dishes accordingly.


“I avoid dishes that are made with insides,” says Arturo Rojas, who runs Lima Tasty Tours—like chanfainita, a stew made with cow lungs, potatoes, and peppers sold by street vendors and small restaurants throughout the city. For him, chanfainita is as local as it gets. “I grew up in a poor neighborhood, and that’s all we could afford to eat as a child.” He’s tentative when introducing the dish, but says that the majority of guests will at least taste it.

For Janet and Anne Crick, the equivalent is Mannish water, a classic Jamaican dish with goat brains.

“When you say, ‘eat like a local,’ you have to make some distinctions to what extreme you want to go when you eat like a local,” Anne says. It’s a tricky balance. Guests are “middle of the road” in terms of openness to try new foods, she says—curious, but not entirely fearless.

Having expectations when you visit a new place is natural and okay. But being a responsible tourist means being mindful of your own comfort level, while also trusting your guide. Do what feels right, and opt out of what doesn’t, but remember that you’re here to expand your taste buds.

Fri Oct 2 , 2020
Celebratory, but maybe not sanitary. The Tampa Bay Lightning and their fans Wednesday basked in the glow of a Stanley Cup victory, complete with a public event at Raymond James Stadium and even a boat parade around the Hillsborough River. Included, as customary, were some players taking drinks from the […] 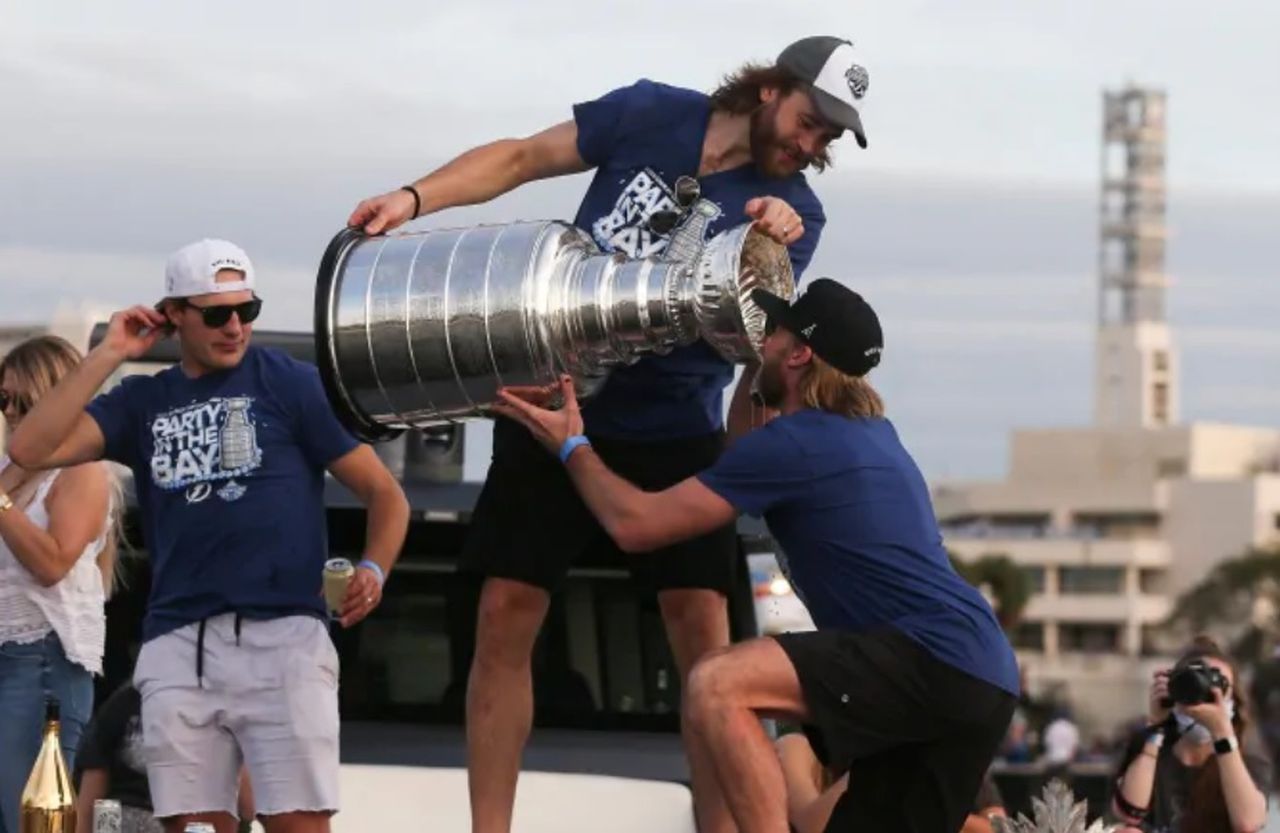