Months have passed since Spain entered a national lockdown that would become one of the strictest in the world. For eight weeks, residents were forbidden from leaving their homes except to buy essentials. Those who broke the rules faced severe fines, some even prison time. My life in Barcelona came […]

Months have passed since Spain entered a national lockdown that would become one of the strictest in the world. For eight weeks, residents were forbidden from leaving their homes except to buy essentials. Those who broke the rules faced severe fines, some even prison time.

My life in Barcelona came to a screeching halt in less than 72 hours. On a Thursday evening, I met friends for drinks after work as usual. We even made plans to go out that weekend, blissfully unaware that these drinks would be our last social interaction for months. It wasn’t until noon on Friday that a nationwide panic began as news of the pandemic broke. Within hours, supermarket shelves had been stripped bare. The city was mostly shuttered when I woke up on Saturday, the few bakeries that remained open so desperate to get rid of their pastries they were giving them away for free. By Sunday, Barcelona had become a ghost town.

Of course, the lockdown didn’t last forever. The Spanish government finally began easing restrictions in mid-June once positive cases had dwindled. Within a few weeks, life almost felt normal again, just with masks. But as residents began to reemerge, there was still one thing missing: tourists.

It’s hard to argue with the idea that Barcelona is one of the most overtouristed cities in the world. The city council recorded 9.5 million overnight visitors in 2019, a figure that doesn’t include the thousands of cruise passengers who arrive in Barcelona’s port every day to spend a few hours sightseeing. Multi-day tourists outnumber the city’s population of 1.6 million by nearly six to one.

This is where things get tricky. On one hand, tourists visiting Barcelona spend 22 million euros every day, accounting for 12% of the region’s GDP. One out of every dozen residents is employed by the tourism industry, jobs that wouldn’t exist without that steady flow of cash. But tourism workers earn just half the average annual salary in the city, scraping by on less than 17,000 euros ($19,800 USD) per year. With the growing number of tourists entering Barcelona straining the city’s physical capacity, residents have questioned whether the financial benefits are even worth it.

The first major anti-tourism protests in Barcelona started in 2014 when residents of the beachfront Barceloneta neighborhood finally had enough of rowdy parties and illegal vacation rental properties. Locals all across the city soon joined in expressing their frustration as they watched their neighborhoods rapidly gentrify. Luxury hotels and high-end restaurants drove out small businesses and sent rent prices skyrocketing, forcing many residents to relocate to nearby cities and commute in for work.

By the end of 2019, authorities in Barcelona had put several measures into place in an effort to curb tourism. The city stopped issuing new licenses for hotels and cracked down on vacation rental platforms like Airbnb. Plans for an airport expansion were curbed; the mayor announced that there would be a cap on the number of cruise ships allowed to dock in Barcelona’s port. It may not have been a total solution, but there was at least some hope that the city had taken a step in the right direction.

And then COVID-19 arrived. In three short days, a deadly virus did more to curb tourism than five years of legislation. A government that had been actively working to reduce the number of tourists just weeks prior now desperately wanted them back.

Walking through Barcelona’s streets, however, there was a noticeable sense of calm. Most residents didn’t seem to mind that the tourists were gone. As news headlines cried major financial losses, I had to wonder: Was the loss of tourism all bad? Or could this, somehow, be the city’s chance to save itself?

I’ve called Barcelona home on and off since 2016. Living here as an expat, I’ve always felt determined to distinguish myself from the throngs of anglophones who crowd the city’s beaches, overpay for cheap sangria, and throw raucous parties that have been known to end in drunken streaking. It wasn’t until a friend pointed it out that I realized I’d developed a habit of issuing a blanket apology anytime someone asked where I’m from. “I’m American…sorry!”

Nowadays, being an American in Barcelona is somewhat of a novelty. Prior to the pandemic, it was just as common to hear English on the street as Spanish or Catalan in certain neighborhoods. I didn’t fully appreciate how drastically things had changed until I passed two strangers speaking English one day and immediately did a triple take.

With no foreigners around to fill them, former tourist strongholds, like Las Ramblas, remained mostly empty for the first several weeks after the lockdown was lifted. But slowly, locals began taking tentative steps into the streets they had long avoided for fear of being trampled by hungover, board-short-clad Yankees. Restaurants took down English-language signs and replaced them with menus more tailored to local tastes. While foot traffic remains at a small fraction of the typical high season, it’s now fairly commonplace to hear Catalan being spoken on the terraces of establishments that once catered to foreigners.

Once the restaurant industry began to fill seats, major tourist attractions followed closely behind. Popular destinations that would normally be booked far in advance this time of year turned their attention to city residents that had never visited the cultural attractions in their own backyard, enticing them with generous discounts.

1. With a large majority of their customer base still barred from entering Europe, most souvenir stalls along Las Ramblas remain shuttered despite getting the green light to reopen months ago.2. A Barcelona resident follows a self-guided audio tour through Casa Vicens in Barcelona’s Gràcia neighborhood. Casa Vicens, one of several attractions designed by famous Catalan architect Antoni Gaudí, has discounted tickets by 35% in an effort to attract local visitors.

As a legal resident with a local identification number, I’m fortunate enough to be allowed in on these deals. Recently I joined a Spanish friend at Casa Vicens, one of the many buildings designed by famed Catalan architect Antoni Gaudí. Our 35% reduced entry price included a complimentary glass of cava and a scoop of ice cream in the museum’s tree-lined courtyard. Gaudí is better known for the Sagrada Familia, which started offering its €26 tickets to residents for free in July. I managed to score mine for October before they sold out.

While attractions are fun to visit, they barely scratch the surface in encompassing local culture. The more time I’ve spent here, the more I’ve come to realize that there are two Barcelonas. The first is a façade created solely for the benefit of tourists. It evokes images of paella and Picasso exhibits, neither of which actually come from the region. And yet these stereotypes are what continue to draw tourists from all corners of the globe.

The second, the one which I consider to be the authentic Barcelona, can’t be found printed on a mug in a souvenir shop. It’s beginning every conversation with “How are you doing today?” before diving into business. It’s spending a sunny Sunday afternoon sipping vermouth with friends. It’s bumping into an acquaintance on the street and sitting down for a coffee instead of rushing to your next destination.

With overtourism pushing locals out of Barcelona, some fear that the Catalan way of life is becoming endangered. Curious about whether the absence of tourists could help bring this culture back, I reached out to Jose Mansilla, Ph.D. in social anthropology and member of the Observatori d’Antropologia del Conflicte Urbà (OACU), a research group based in Barcelona.

“You cannot take a photograph of Catalan culture,” says Mansilla. “It is not simply a spectacle or a production. As a whole, Catalan culture aligns with Mediterranean culture: enjoyment and socialization in public spaces.” In short, this is how overtourism has most impacted the local way of living. Gentrification has essentially acted as cultural deforestation, choking out the physical spaces in which local communities can congregate.

The silver lining, Mansilla says, is that the travel bans resulting from COVID-19 have already begun reversing some of the damage. “If the streets become empty of tourists, then yes, there is an opportunity for Barcelonans to reclaim them. We saw this over the summer when children were playing in the streets of the Gothic Quarter like they hadn’t in years.”

As Barcelona’s quietest summer in decades comes to a close, I realize how fortunate I am to be among a small handful of Americans experiencing the rare and beautiful resurgence of Catalan culture firsthand. But the real challenge will be turning these short-term trends into permanent changes. How can the city continue to preserve its identity once travel restrictions are lifted and tourists return in full force?

1. Small groups of European tourists feed the pigeons in Plaça Catalunya.2. Locals play a game of beach volleyball in Barceloneta. With fewer vacationing beachgoers, residents have had more room to enjoy social activities like sports.

“We have to change the type of tourism,” says Josep Maria Raya, head of the Tecnocampus School of Business at Universitat Pompeu Fabra, a public Catalan university. This has been heavily discussed during government efforts to tackle the overtourism problem; Barcelona has a worldwide reputation as a cheap vacation spot, and the average tourist only spends $158 every day. Shifting the focus to business, educational, and medical tourism could bring in the same amount of revenue while reducing the number of people who visit the city.

Even if this is successful, the city’s residents need to figure out how to coexist with some level of tourism. Like it or not, tourists will always be a part of life in Barcelona. “The only way to return to 10 or 15 years ago is to change the area to one where tourism and local citizens can live together,” says Raya. This will require prioritizing locally owned businesses and making sure short-term vacation rentals don’t wipe out the supply of affordable housing.

At the same time, the pandemic has brought to light a pre-existing need to create opportunities for tourism workers to earn a living wage. Conditions for these employees have always been “very, very uncomfortable,” as Mansilla puts it, “working long hours with contingent contracts, many times for fewer hours than they actually worked.”

Thanks to the pandemic, says Mansilla, the city has an opportunity to pursue economic diversification by bringing in more sustainable industries–and jobs along with them. “The employees who previously worked under poor conditions in the tourism industry now have the opportunity to find a different job with more dignified conditions. That would be the start of a solution.”

It’s a tall order, and only time will tell what the government will do once tourism demand returns in full force. In the meantime, all sides remain focused on attracting enough tourists from within Europe to survive the rest of the pandemic.

Wed Oct 14 , 2020
SKOKIE, IL — Police said evidence from a pair of break-ins at village restaurants over the summer led investigators to a Skokie man. Albert Ishu, 52, of the 8300 block of Lowell Avenue, was arrested Wednesday evening at his home, according to Skokie police. The next day, prosecutors approved two […] 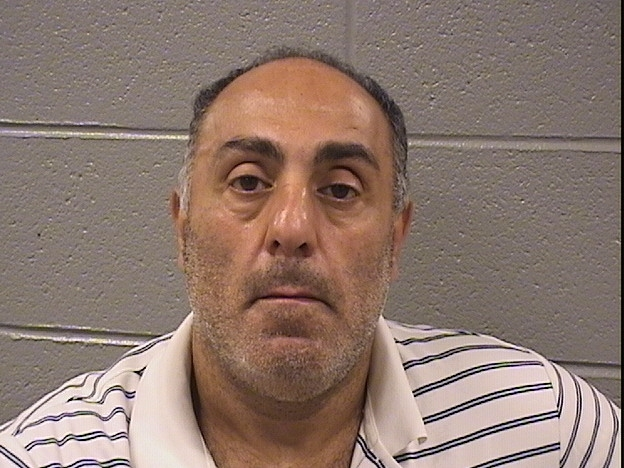