Tens of thousands of low-income California seniors stopped receiving home deliveries of free food just as COVID-19 cases and deaths in the state were peaking, thanks to a century-old federal policy to include surplus cheese in government aid packages. As the coronavirus began to spread in March and Gov. Gavin […]

Tens of thousands of low-income California seniors stopped receiving home deliveries of free food just as COVID-19 cases and deaths in the state were peaking, thanks to a century-old federal policy to include surplus cheese in government aid packages.

As the coronavirus began to spread in March and Gov. Gavin Newsom called on millions of seniors to self-isolate, these needy Californians initially were able to have a box of dried food delivered to their homes each month at no cost because federal regulators granted a state request to temporarily waive certain rules governing the Commodity Supplemental Food Program.

The three-month exemption allowed food banks to remove cheese — the only perishable item in the boxes — and then use private companies or volunteers to deliver the monthly aid to clients’ homes, rather than require vulnerable seniors to pick them up during the pandemic. Several aid groups relied on Amazon.com and others who agreed to deliver the boxes for free.

But in July, the federal waiver ended and U.S. Department of Agriculture officials refused to extend it, meaning cheese must again be included and, more problematically, refrigerated in transit.

California saw an immediate 30% drop in the number of seniors receiving their monthly food aid through the program. State data show 40,000 fewer California seniors received food in July than in June, with the majority living in Los Angeles County, Orange County and the Bay Area.

Luu has polio and can’t lift more than a few pounds, so he’s unable to pick up his mother’s package. In the past, he was able to rely on friends or volunteers to pick it up at the food bank and bring it to their home.

“Before the pandemic, it was easy to ask someone to help us. But now they’re afraid of disease,” Luu said.

For three months, they benefited from the USDA waiver, which allowed their box to be delivered directly to their home. He said they used the food to supplement most meals, with the canned meat being his mother’s favorite.

In July, the deliveries ended. “We miss it,” said Luu.

The Los Angeles Regional Food Bank blamed the discontinuation of home deliveries for a 45% decline in the number of its senior clients who received food between June and July, when participants were told they would have to resume in-person collection of the packages.

“A lot didn’t come, our sense is, because they are worried about coming outside,” food bank President Michael Flood said. “It’s putting the seniors in this difficult dilemma.”

The drop held steady in August, he said.

At the same time, overall demand spiked at food banks across the country as several states, including California, scrambled to cope with a wave of COVID-19 infections.

The Commodity Supplemental Food Program, sometimes called the senior box program, serves more than 600,000 people nationally older than 60 with incomes of less than 130% of the federal poverty level. That’s $16,588 for a senior living alone or $22,412 for a couple.

Each month, more than 120,000 California seniors in the program receive a box of shelf-stable food, which includes a variety of canned meats, fruits and vegetables, rice, beans, powdered milk and peanut butter.

But under federal rules, the boxes must also contain 2 pounds of cheese, the lone item needing refrigeration.

For decades, what’s often derided as “government cheese” has played a role in most federal food aid programs. Seeking to stabilize the dairy industry in the 1940s, the government began buying surplus dairy products and distributing the glut through school lunches and other aid programs. It reached a peak in the 1980s and ’90s, but remains a major component of food assistance today.

USDA officials defended the decision to end the cheese waiver in July, noting it was always intended to be temporary.

The waiver was granted to give the state time to find a way to deliver the cheese, USDA spokeswoman Mary Kay Gominger said.

“The cheese is a critical part of the food package,” she said.

But Rep. Adam B. Schiff (D-Burbank) said any nutritional value of cheese is “not a benefit if people can’t get the food at all.”

“We have the availability of food for our seniors and the means of getting the food to their homes. Please continue your efforts to ensure that our seniors do not have to risk their health to overcome their hunger,” the letter states.

In addition to leaving out the perishable cheese, lawmakers want to temporarily waive the USDA rule that recipients personally accept the package and show identification. That would allow delivery companies to leave the box on a porch or stoop if no one answers the door. Both are department regulations, not legal requirements.

“It seems like a ridiculous requirement when we’re trying to help seniors — help them get through this pandemic,” Cisneros said.

The USDA rejected the state’s request to extend the waiver Sept. 10, stating that “allowing states to consistently issue food packages without a key component, such as cheese, is not appropriate for a long-term distribution model,” according to an email the state sent food banks participating in the program.

In addition, USDA officials complained that food banks in California — which they said was the only state to use third-party companies to deliver food — “substantially exceeded” their authorized limit of food boxes distributed under the program during the three-month period. They said that suggested third-party companies had delivered to the wrong addresses.

Schiff said he suspects federal regulators are bowing to pressure from the dairy industry.

But Matt Herrick, a senior vice president at the International Dairy Foods Assn., which represents U.S. dairy processors, said he was unaware of the problem until alerted by The Times. He suggested the industry would be open to continued flexibility during the pandemic.

“This is a challenging time for many, and dairy producers and processors want to do everything we can to help ensure food security for those in need. And that may require additional creativity and the appropriate flexibility by the government agencies that oversee these programs to ensure food is reaching people in need without creating impediments,” Herrick said.

Paul Ash, executive director of the San Francisco-Marin Food Bank, said the requested changes would be temporary. The food bank saw a 44% drop in food boxes getting to seniors between June and July, he said.

“I don’t think that there’s any desire to see cheese go away,” Ash said. “We’re always happy to take more cheese when the USDA has it.

“We don’t want to be in the delivery business for the long run, trust me. Our perfect world is not delivery through Amazon or through volunteers,” he said.

“We’d like to get back to where we were,” Ash said. “We don’t want to do this forever, and Amazon is not going to continue to do this for free. It’s just too costly.”

Since mid-March, Amazon has delivered more than 8 million meals from food banks in more than 25 cities nationwide without contact between the driver and client, according to Seema Ramchandani, who works on the company’s disaster relief team. But only California food banks asked it to deliver food to seniors through the Commodity Supplemental Food Program.

It’s “untenable” to ask Amazon and other delivery companies to jump through so many hoops, such as refrigerating boxes and checking recipients’ identification, said Gregory Scott, president of the Community Action Partnership of Orange County, which he said has seen a 34% drop in seniors receiving the boxes since the waiver ended.

“USDA has to understand the impact this is having,” he added.

Thu Oct 1 , 2020
It is estimated that in Central America close to 17 million people show interest in the digital environment for carbonated beverages, with Dr Pepper, Coca-Cola, Fanta and Mineral Water being some of the terms most associated with consumers with high purchasing power. An analysis of the interests and preferences of […] 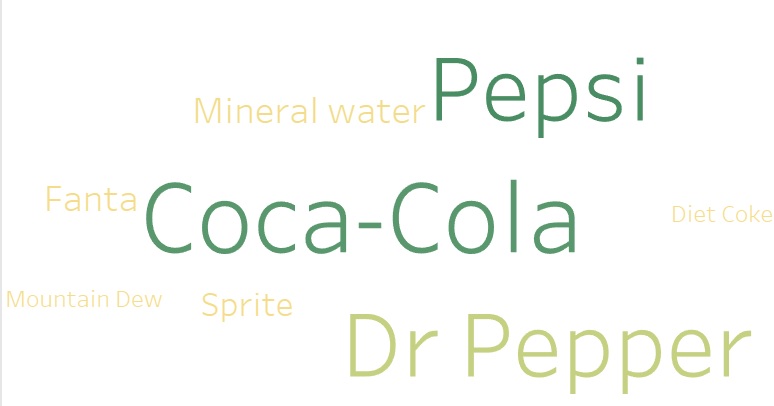