The number of Wisconsin households receiving help putting food on the table is up 21% this year, reversing a trend of decline since 2013.  © Courtesy of the Wisconsin Policy Forum This map shows increased need for the FoodShare program by county from August 2019 to August 2020. According to a report […]

The number of Wisconsin households receiving help putting food on the table is up 21% this year, reversing a trend of decline since 2013.

© Courtesy of the Wisconsin Policy Forum
This map shows increased need for the FoodShare program by county from August 2019 to August 2020.


According to a report from the Wisconsin Policy Forum, 66,000 more households applied for FoodShare benefits so far this year, totaling 378,200 currently receiving benefits.

As of August, 724,200 individuals were taking part in the program, a 19% increase over last year’s numbers. FoodShare is the state program run by the Department of Health Services that distributes the Supplemental Nutrition Assistance Program (SNAP) benefits.

Get daily updates on the Packers during the season.

The steep climb in Wisconsinites needing help with food is due to the coronavirus pandemic, the report said, and showcases the impact the pandemic has had on people across the state. The increase is on the heels of economic recovery following the Great Recession and changes to state law in 2013 and 2017 that limited who qualifies for the program, the report noted.

Benefit payments also rose during the pandemic, the report said, because recipients are able to access maximum funds during “state of emergency” periods.

Currently, the maximum benefit per month is $646 for a family of four and $194 for a single person. The average allotment in the month of August was $209, the report said.

The need for food was distributed across the state, with 40 of 72 counties and two tribes seeing an increase of 20% or more in recipients. Menominee County had one of the largest number of recipients, with 42% of its population receiving benefits. Milwaukee County also has a large number, with 27% of its population enrolled in the program, the report said.

Milwaukee also had the highest total number of individuals enroll, as compared to 2019, said Ashley Fisher of the Wisconsin Policy Forum.

Recipient numbers fell slightly in July, a reflection of lockdowns ending and lower unemployment numbers, the release said. But in August, numbers climbed to the highest point yet during the pandemic, despite unemployment decreasing. The report also noted an anecdotal increase in demand at food pantries in August, too.

The rise in August could be attributed to the end of the $600 federal unemployment benefit, the release said. After those benefits expired at the end of July, people could have fallen below the poverty level, allowing them to qualify for SNAP benefits. People returning to jobs for less hours and less pay was also a reason that benefit numbers may have increased.

The need for food assistance may continue to grow, the report said, and depends on what federal benefits are offered to those on unemployment, federal support for SNAP, jobless rates and the effect of restrictions on who can enroll in the program.

To qualify for the FoodShare program, recipients must make below $26,200 for a family of four or $12,760 for an individual, the report said.

Typically, able-bodied adults between 18 and 49 with no children qualify for three months of benefits every three years, unless they’re working or in a work training program for 20 or more hours per week. The exemptions for training or working were waived from April through September, and a second exemption was approved from Oct. 2020 through Sept. 2021, the report said.

Laura Schulte can be reached at [email protected] and twitter.com/SchulteLaura.

Our subscribers make this reporting possible. Please consider supporting local journalism by subscribing to the Journal Sentinel at jsonline.com/deal.

Fri Sep 25 , 2020
MANAHAWKIN, NJ — New Jersey restaurants have faced a harsh year because of the coronavirus pandemic, and winter weather could further limit their options. One Manahawkin establishment found a way to help them get around that: “igloos.” The ManaFirkin Brewing Company will place several weatherproof domes in its beer garden. […] 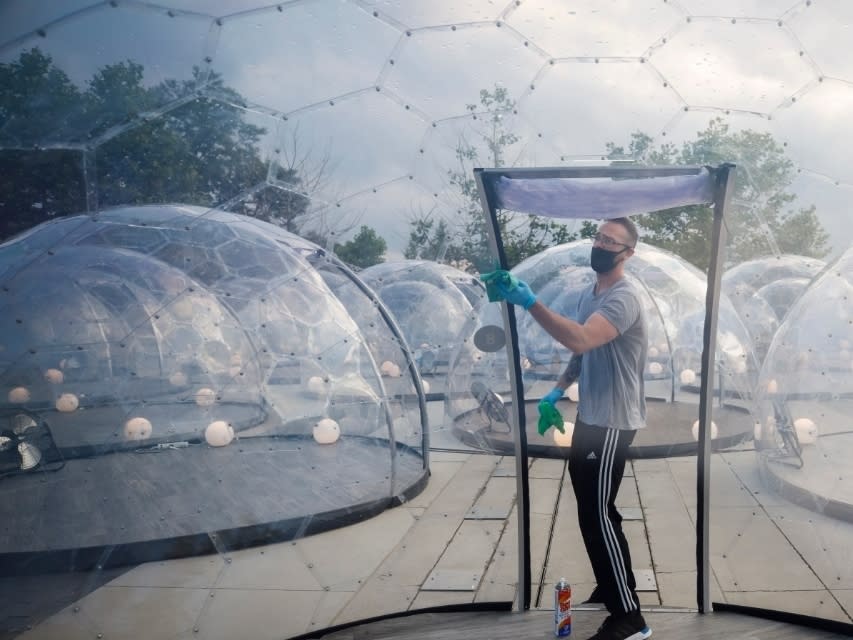