Sometimes, bigger really is better. I was reminded of that the hard way during a recent enchilada blowout. Here I am, with dozens of dried chiles, halved onions, tomatoes and garlic cloves, all in need of a dry roasting on a hot surface. I own a hefty 10-inch round iron […]

Sometimes, bigger really is better. I was reminded of that the hard way during a recent enchilada blowout.

Here I am, with dozens of dried chiles, halved onions, tomatoes and garlic cloves, all in need of a dry roasting on a hot surface. I own a hefty 10-inch round iron comal, which is the right tool for the job under normal circumstances. In this case, with four different enchilada sauces to prepare, it meant working in slow, laborious batches while the solution was slumbering away, nearly forgotten, on my grill outside.

Folks, if you don’t already own one, get your hands on a cast iron griddle large enough to cover two burners on your stovetop. Lodge makes them in a number of sizes and designs priced around $30 to $60 on amazon.com. A reversible model with a flat side and a side lined with ridges is particularly useful if you’re craving grill marks on a steak or burger but can’t fire up the Weber for whatever reason.

These things are kind of a sizzling blank slate for anyone used to cooking within the confines of a skillet. Naturally, they excel at frying up a massive breakfast of bacon, eggs, hash browns and pancakes, but that’s only the beginning. 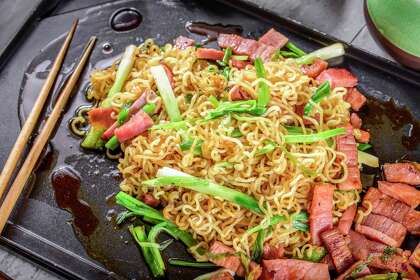 In my case, once I realized I left this marvelous tool outside and gave it a quick scrub, I was able soften a half-dozen tortillas at once while preparing enchiladas — a monumental achievement to anyone used to cooking them one-at-a-time in a pan. There’s just enough of a lip on my griddle to contain the thin layer of oil needed for the job.

I also happen to live in a fairly tiny house with minimal counter space. One of the concessions made upon moving in was giving up the toaster. These days, that griddle, wiped dry of any lingering grease, takes care of all my toasted bread needs. That goes for grilled cheese sandwiches as well — I can fit six at a time on this thing.

While you may find the griddle living on the range more-or-less full time, on those occasions where all the burners are required you can simply store the ovenproof slab of metal in the oven. And while it’s in there, you might as well put it to use.

On ExpressNews.com: Your guide to cookware finishes and how to use the pans best

The cast-iron skillet can double as a pizza stone with excellent, crispy-crust results. Just heat the griddle (with the smooth side up if its reversible) in a 450-degree oven. Shape your pizza — you can use store-bought or homemade dough — into a rectangle slightly smaller than the griddle’s surface and carefully slide it onto the hot metal. You’ll have a perfect pie ready to nosh in about 10 minutes. 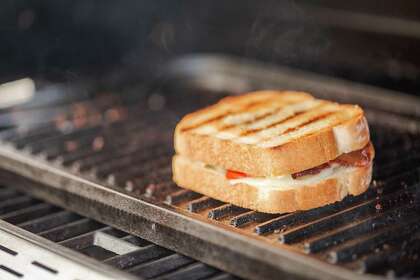 And if you’re asking why, exactly, my griddle was sitting outside on the grill, there’s a good reason for that, as well. We recently had friends over for tacos stuffed with chicken and beef fajitas and al pastor pork. If you’ve ever sizzled up that much meat on the stovetop you know it means a splatterfest of oil coating everything by the end of the night. But place that griddle on the grill, which covers all the gaps between the grates where meat might fall to a fiery demise, and your cleanup is a breeze.

If I had you at enchiladas, you’re in luck. All that cooking was for a recent Taste story on how to make enchiladas — and enchilada sauces — at home, featuring guidance on the topic from San Antonio restaurateur and cookbook author Cappy Lawton. These are some of his favorite recipes researched for his 2015 cookbook “Enchiladas: Aztec to Tex-Mex” coauthored with Chris Waters Dunn.