Photo: Matt Dinerstein/FX Watching The Bear isn’t exactly a pleasant experience. The sounds of the kitchen — the ticking of the clock, the whir of the industrial mixer, the clanging of metal pots, not to mention the constant conversations shouted across sizzling pans — make my brain hurt. I could […]

Watching The Bear isn’t exactly a pleasant experience. The sounds of the kitchen — the ticking of the clock, the whir of the industrial mixer, the clanging of metal pots, not to mention the constant conversations shouted across sizzling pans — make my brain hurt. I could handle only two episodes at a time. After an hour of watching Carmy (Jeremy Allen White) try to keep his late brother’s struggling restaurant open while managing his late brother’s ornery best friend, Richie (Ebon Moss-Bachrach), and a full staff of personalities, I needed a break.

But I always came back. It’s easy to be drawn to stories of rebels and outcasts. Restaurants are full of both. And professional kitchens have their own lingo, power dynamics, and set of behaviors that look foreign to an outsider, making it a people-watcher’s dream. And then there’s the food! So if you also want to immerse yourself in the thrilling (and oftentimes stressful) world of restaurants, or if you just need a cathartic story centered on a kitchen, here are 11 books to check out.

Anthony Bourdain’s Kitchen Confidential is the obvious place to start. The late celebrity chef entertains with wild stories of snorting lines of coke and falling asleep on the beach at sunrise after a night of partying. He advises readers on what to order (and when) based on his years of being inside professional kitchens. But this memoir is also brimming with stories of autocratic chefs who demand total loyalty and the willingness to work through injury or sickness, to say nothing of the abuse they dole out to their staff — an experience The Bear’s Carmy could certainly relate to. Rereading Kitchen Confidential, I’m struck by how Bourdain relishes the challenge to be the best under such horrific circumstances. While he would later speak out against the male-dominated “meathead” restaurant culture, and reflect on the role Kitchen Confidential had in promoting this worldview, this version of Bourdain seems to accept that the abuse he faced was just part of paying his dues in becoming a chef.

Jen Agg, author of I Hear She’s a Real Bitch and owner of several restaurants in Toronto, doesn’t want to play by the rules created and maintained by chef bros, her term for the dudes who insist on running their kitchens with a perfectionistic, overbearing attitude. So she created her own path forward, opening her own restaurant called the Black Hoof. As the owner, she challenges the Way Things Are Done™. Why should the back of house and front of house always be feuding? Why should she have to prove single-handedly, usually without proper support, that she can beat a system determined to crush her? This book is full of anecdotes, tips for building your own restaurant, and strong opinions about cocktails.

Fine-dining institutions like Per Se and Eleven Madison Park emanate an aura of serenity and elegance for patrons. Inside the kitchen? Different story. Kwame Onwuachi takes us into these restaurants as well as the Culinary Institute of America to show us what it takes to work in some of the best restaurants in the world while also grappling with racism both inside the industry and out. His journey takes several turns, from joining a gang and selling drugs to working on a ship, cleaning up the BP oil spill and as an assistant chef. The former Top Chef contestant will have you rooting for his success as he opens his first restaurant, the Shaw Bijou, in D.C.

Like fine dining, the world of wine is also full of experts who are at times more interested in gatekeeping than sharing their knowledge. Sommelier Victoria James’s memoir brings the reader inside Michelin-starred restaurants as well as to California vineyards. James’s love of learning is palpable; she includes asides to explain why knowing a wine’s vintage or soil type is so important to savvy drinkers. She also recounts the rampant misogyny she faces from patrons, male bosses, and instructors eager to take advantage of their power and status. James has acknowledged that it can be a tough read, but she believes in the importance of sharing her story.

Reading this memoir from the southern pastry chef Lisa Donovan, I thought of the quiet pocket of the kitchen in The Bear that belongs to Marcus and his doughnuts. Donovan likes the solitude of baking. Her memoir captures the meditative feeling of kneading bread or mixing cake batter. And like a good buttermilk, her memoir also has some zing. Donovan, who had a child young, recounts the breakneck pace and low pay of professional kitchens and how they keep mothers out. She also sees how male chefs take credit for the work of their female colleagues. She fights for the recognition she deserves in the kitchen and shows that leaving can sometimes be the hardest thing to do. A trigger warning for readers in regard to abuse and sexual assault.

In The Bear, Carmy and his brother, Mikey, weren’t always close, but they were bonded by both their family ties and their shared love of food. Michelle Zauner’s memoir, Crying in H Mart, steps outside the professional kitchen and leans into that love we have with our favorite dishes and the people who made them for us. When her mother receives a cancer diagnosis, Zauner returns to Eugene, Oregon, to care for her and, in the process, goes looking for pieces of herself through the Korean recipes she grew up eating as a child.

Suzanne Barr knows there’s no wrong time to start cooking professionally. Grieving her mother’s death from cancer, Barr escapes to a retreat. By the time she returns to New York City, she knows she wants to be a chef. With passion and dedication, she enrolls in the Natural Gourmet Institute at 30. Entering the industry as a more experienced adult, she knows what she doesn’t want: militarylike kitchens and abusive head chefs. From there, it’s an externship in Kauai and then to the Hamptons and Paris as a private chef. Through all of her travels in My Ackee Tree, Barr weaves together stories of her Jamaican heritage and her desire to create a tasty story all her own.

Consider this novel a palate cleanser. While it borrows some of the high stress of The Bear — it takes place during a cooking-competition show, after all — it ends with a happily ever after. This queer love story follows Dahlia as she says “fuck it” to her unfulfilling job and enters Chef’s Special, a Top Chef–like cooking competition. Fellow competitor London is determined to win and become the first nonbinary victor. They can’t be drawn in by Dahlia’s gorgeous hair or her silly sense of humor. And yet they find themselves flirting with her over freshly made hummus and wanting to spend more time with her after the competition finishes.

Hot Mess, by Emily Belden, is another option for those looking for a novelistic escape that takes place in a restaurant. It follows Allie Simon as she sinks her life savings into her chef-boyfriend’s new restaurant — only for him to disappear weeks before it opens. She joins the restaurant staff as an assistant general manager, and through her, we get to see how important the front-of-house staff is to a restaurant’s success.

In Memorial, a novel by Bryan Washington, Mike and Benson are a couple living together in Houston. Mike cooks, both as a chef and at home. Benson stays out of the kitchen. They’ve fallen into a rhythm in their relationship. Or is it a rut? When Mike’s father gets sick, he rushes to Osaka to take care of him. He only tells Benson that his mother, Mitsuko, is visiting the morning he leaves. Benson and Mitsuko don’t speak much, but they grow close by cooking alongside each other. And with Mike gone, Benson can really think about what he wants out of his life and his relationships.

And finally, a title if, like me, you’re curious about how we started worshipping chefs as tastemakers in the first place. Chefs, Drugs, and Rock & Roll, by Andrew Friedman, investigates the rise of chefs to stardom in the 1970s and ’80s and includes insights from the battle between California and France as food leaders. Interviews with culinary icons such as Alice Waters and Wolfgang Puck reveal what life was like in the midst of the food revolution.

How to Clean an Air Fryer

Tue Aug 2 , 2022
We all know Ree Drummond loves a good air fryer. In fact, she not only called herself “obsessed” with the super-handy kitchen tool, but she debuted a gorgeous vintage floral 6.3 quart model through The Pioneer Woman line. And it’s no wonder she hopped on this trend: After all, air […] 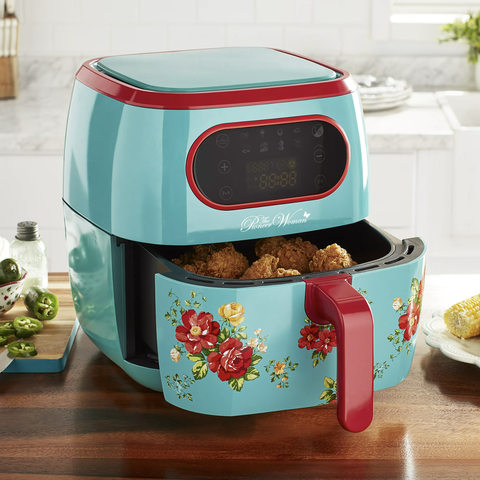