I wish I had an asado gang the way I have two book groups and a hiking pod. In Argentina, this meat-centric cookout is a similar kind of social club, except with committed carnivores. Argentines eat the most beef in the world—close to 155 pounds per person per year. And […]

I wish I had an asado gang the way I have two book groups and a hiking pod. In Argentina, this meat-centric cookout is a similar kind of social club, except with committed carnivores. Argentines eat the most beef in the world—close to 155 pounds per person per year. And when gauging serving sizes, they plan on a good pound of meat for each guest.


Earlier this year I visited South America in search of this traditional culinary potlatch. I learned about its components, from the asador (or griller) and bright salads of tender greens and charred vegetables, plus roasted potatoes or papas fritas to vinegary accompaniments like chimichurri and salsa criolla.

Quantities of Argentina’s emblematic Malbec are a near necessity to fuel hours of drinking and talking and strolling back and forth to the parrilla, an open coal-fed fire, as a seemingly endless cavalcade of meats, juices running, are ferried to the table. To ease the wait, asados typically start with a series of quick-cooking appetizers, like spicy fresh chorizo, blood sausages, veal tripe, and crunchy-crusted sweetbreads, then build to massive joints slowly grilled until pink from edge to edge.

RELATED: Argentine Malbec Is Better Than Ever

Multiple weekly cookouts are the norm—on Sunday afternoons with the family, in a friend’s backyard, on the way to the beach at a roadside joint, at work as a team-building exercise, or even on a building site, urban gaucho-style, using construction discard for fuel. As a tourist, I wasn’t invited to private gatherings, although they’re so common I did, accidentally, crash the Friday staff asado at Viña Cobos winery. Still, my traveling posse of four got a true feeling for this meat feast at restaurants in Buenos Aires and Mendoza.

Restaurants may feature prime cuts compared to homey tira de asado (short ribs cut across the bone into thick strips), sirloin and flank steak, but, modest or extravagant, they’re prepared in the same way. And since grillers can’t stray from the parrilla for very long, they were a captive audience for my questions as they burned fruit trees and other logs down to smoldering coals, then raked them under grates and turned and turned the tomahawk rib eyes, T-bones, and bone-in New York strips. Lunches and dinners were tutorials in the Argentine way with cuts for a crowd, whether beef, pork, or lamb, and most of the same moves can also be deployed on whole birds and fish, too.

© Jane Sigal
Grilling season doesn’t have to be over. Here are six rules for getting the most flavor out of any cut of meat.


With these essential meat-cooking tips, you can try your own asado at home, because who said grilling season had to end?

Juan Gaffuri, who is executive chef at Elena Restaurant in the Four Seasons Hotel Buenos Aires, insists I hold back on the chimichurri until after I’ve had a bite of steak. It’s not that he’s disrespecting the spicy herb-packed sauce; he just wants me to taste the beef first, naked.

Asadores do everything possible to keep from tainting the pure meat flavor, including using grates with canoe-like cross bars, which channel fat so it doesn’t drip on the coals and create smoky flare-ups.

2. Be obsessive about salt

Asado meat is typically seasoned just before grilling or as soon as it hits the hot metal with no more than pebbly “barbecue” salt (sal parrillera or gruesa). With medium crystals larger than Morton’s kosher, it dissolves more slowly than fine table salt, to match the country’s low-and-slow method for cooking big cuts of meat.

This, Gaffuri says, builds a better crust. After carving, he scatters a delicate shower of sea salt from Patagonia over the sliced meat, yielding the occasional pop of saline crunch. My stash of sal marinara de Patagonia is getting low, and I haven’t found a U.S. source, but when I run out, I’ll swap in equally covetable, and more accessible, Maldon flakes.

This is an opposite-of-rushed experience. Hector Ordonnes, chef at Alpasión Lodge in Mendoza, takes 45 minutes just to burn the logs down to the proper stage of glowing embers before the grilling starts.

“You have to be patient,” he says. “You cannot do an asado quickly.” When you’re dealing with large cuts, if the heat’s too high, you wind up with black-and-blue meat—burnt on the outside, raw on the inside. Low heat is key. As is loading the grill in a certain order. Ordonnes first arranges the largest slabs on the grate, since they take the longest time to cook. Then the achuras, the organ meats, and the sausages, which are the first thing you eat at an asado.

How does he know when the heat is at the right temperature? “I have to listen,” says Ordonnes. “I have to hear the meat chirping, the fat dripping in just the right way.”

At Piedra Infinita Cocina, chef Emiliano Gasque works on a sleek stainless steel parrilla, but his cooking methods are quaintly old-fashioned. (The whole baked eggplants and quinces that emerge from his vine cutting–fueled cob oven are shrunken, intensely flavored versions of themselves.)

The grill is heated with wood embers, not gas or even charcoal, and his steaks are cooked only on the bone, a kind of talisman for him. “The tastiest part of the meat is next to the bone,” he tells me. And he starts and finishes grilling bone side down. After placing a four-pound roast on the grate, he doesn’t fiddle with it for 30 minutes. Then he turns the meat to brown the rest, 10 minutes on each of the three remaining sides, until medium-rare 130°, then lets it rest on the heat, bone side down again until serving.

Gasque knows when the meat’s done just by touching, but I think, I’m not taking any chances with prime rib. I’m using an instant-read thermometer.

5. Marinate your meat after grilling

I know to let a hefty piece of meat rest before cutting into it, so the juices redistribute evenly and the roast comes out rosy red and succulent. I never thought of this downtime as a flavor-boosting situation, but the opportunistic chef Lucas Olcese at Lagarde Winery always has a pan of red wine Patagonian sea salt mixed with peeled garlic cloves, rosemary sprigs, extra-virgin olive oil, and beef stock ready for receiving mild-tasting cuts like tenderloin hot off the parrilla. As the fibers relax after ten minutes or so, they also soak up the pungent bath, delivering maximum flavor.

At Casa de Uco, my Game of Thrones–size rib eye arrives on a carving board with a channel for catching the pooling blood. Alongside, there’s a cute copper pan of crunchy golden potatoes that yield to an unbelievably creamy interior. But what I’m really crushing on is the glossy KDS steak knife.

Chef Juan Ignacio Perez Daldi explains that the custom knives are forged right here in Mendoza, at a family workshop in the foothills of the Andes Mountains. The razor-sharp blade makes a clean slice in my steak, not the jagged tear of a serrated knife, plus it’s long enough to slide through meat without having to saw back and forth. The riveted handles are fabricated from ebony or local materials, like quebracho—the same variety of hardwood often used to fuel the region’s asados.

Sun Oct 4 , 2020
Published: 10/3/2020 9:24:14 PM Like many similar organizations across the country, the New Hampshire Food Bank has received boxes of food from the U.S Department of Agriculture that contain a letter with President Donald Trump’s signature. “As part of our response to coronavirus, I prioritized sending nutritious food from our […] 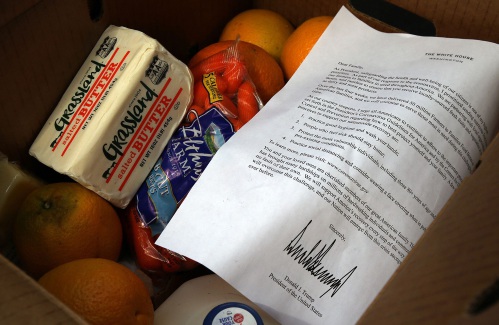