Trying new products is one of my favorite parts about being a food writer. For the past five years, I’ve hosted weekly taste test videos for Austin360.com, where I try new (and new-to-me) products, mostly from Austin-based food and drink companies. I’ve always been a grocery store fanatic, stopping by […]

Trying new products is one of my favorite parts about being a food writer. For the past five years, I’ve hosted weekly taste test videos for Austin360.com, where I try new (and new-to-me) products, mostly from Austin-based food and drink companies.

I’ve always been a grocery store fanatic, stopping by bodegas, farmers markets, corner stores and supermarkets any chance I get, especially while traveling, and these weekly videos have encouraged me to think about my own city as a culinary amusement park. Whole Foods, Central Market and the farmers markets used to be the prime places to find new and trendy products, but now you’re just as likely to find those at H-E-B, Fresh Plus, Wheatsville, Natural Grocers, Sprouts and all those well-curated neighborhood convenience stores, including Thom’s, Royal Blue, Mosaic and the Bee Grocery.

The local consumer package good, or CPG, industry continues to grow, even amid the coronavirus pandemic, with hundreds of food companies now calling Austin home. To give you a snapshot this diverse (and delicious) food world, I have rounded up some of my favorite products I’ve tried over the years.

Taste is subjective, so I’ve tried to include notable brands whose products might not be my first pick but could be yours. Even though there are more than 50 companies on this list, this group is just a start, and I hope it inspires you to get out there and start exploring. Your new favorite grocery store product might be just around the corner.

Central Texans have long enjoyed the German-style sausages that come out of Elgin’s smokehouses, but I’m a fan of Smokey Denmark sausages, which date back to 1964. The company continues to make their sausages at a production facility in East Austin, and you can find them at local H-E-Bs. A newer sausage brand you should know about is called Three Six General, which sells a variety of tasty links at more than half a dozen farmers markets, Salt & Time, Farmhouse Delivery and the company’s new butcher shop in San Marcos.

Pure Luck Dairy introduced chevre to many Austinites when the Dripping Springs-area cheesemakers first started selling it in 1995, and now we have a few more local cheesemakers to choose from, most notably Bee Tree Farm from a goat farm near Manor. Bee Tree’s feta and halloumi, which you can find at Antonelli’s Cheese Shop, Boggy Creek, Wheatsville, Farmhouse Delivery and Central Market, are a real treat when you’re feeling uninspired by other proteins in the grocery store.

Blue Bell used to be the only ice cream of choice for many Texans, but that has changed dramatically over the past decade. Teo Gelato closed its retail shop to focus on grocery sales, and Lick Honest Ice Creams and Nada Moo continue to serve customers by the scoop in retail stores and by the pint in supermarkets. My current favorite is Luv Fats, a vegan ice cream available at local farmers markets and the Bee Grocery. I’m also glad that Jeni’s Splendid Ice Creams has joined the fray. The company is based in Ohio, but it has two Austin storefronts and a robust online market. It’s fun to watch these companies come up with flavors I never thought I’d see in a pint, from Luv’s caramel-like soy sauce to Jeni’s watermelon taffy (with all the tangy sourness of a Jolly Rancher).

While you’re in the frozen section of the store, Austin-bred food brands I love include Smart Flour Foods (gluten-free pizzas), Afia Foods (falafel and kibbe), Wundernuggets (chicken-and-veggie nuggets), Beetnik (organic frozen meals), Bola Pizza (artisan pizza) and Boomerang’s Pies (Australian meat pies). We also get to choose from two impressive local empanada companies, Cocina 54, which sells gluten-free hand pies, and Mmmpanadas, which started as a food truck and is now a grocery brand found at H-E-Bs throughout Texas. For frozen dumplings, you can’t go wrong with Steamies, a mom-and-pop-and-kids operation that started at local farmers markets and is now based in a small retail store on Airport Boulevard, and Lotus Chinese, a restaurant that recently started selling frozen dumplings online and at the Bee Grocery.

Cold brew coffee was a new segment of the coffee industry a decade or so ago, which is when companies like Chameleon Cold-Brew and, later, Cuvee Coffee started selling their products. When I’m buying an afternoon pick-me-up, I usually reach for High Brew, a ready-to-drink cold coffee drink that you can now find at thousands of stores across the U.S.

Cat Spring Yaupon was the first Central Texas company to harvest yaupon leaves as a native source of caffeine and sell it to Austin customers, and now there are a handful of others, including Lost Pines Yaupon, which sells a yaupon concentrate and loose leaf tea, and Yayaya, whose bottles of yaupon tea are at Central Market and Whole Foods.

White Mountain was an early pioneer in Austin’s food scene, selling their Bulgarian yogurt in natural food stores, and now there are a few more yogurt options, including my top pick, Culina, a coconut milk-based yogurt that launched in farmers markets and is now available in Whole Foods, Wheatsville, Natural Grocers and Sprouts. Another hard-to-pass-up treat: Sassy Lassi, a drinkable yogurt that comes in six flavors at Whole Foods Market, Central Market, HEB and Walmart.

Baby and toddler food is a hot market, and although my kids are way past the squeezable pouches and Cheerios-for-snacks stage, there are a couple of local companies my newer mom friends continue to rave about. The first is NurturMe, a company that started in 2009 and sells squeezable purees and dried cereal mixes made with ancient grains. The second is Serenity Kids, a newer company that sells veggie purees, as well as baby foods with pasture-raised meats.

I miss the days of Mary Louise Butters brownies, but I’m glad that Love Puppies brownies are still going strong after more than 15 years. You can find them at some local markets, including Thom’s and King Liquor, but they are a huge hit at Torchy’s Tacos, where their chocolatey squares are the dessert of choice. Stroopwafels from the Austin-based Stroop Club are another local sweet treat that you can find at local markets and coffeeshops. Cocoa Puro’s chocolates and chocolate-covered cocoa beans used to be sold only at farmers markets, but they are now on the shelf at Central Market. The colorful packaging from chocolate companies Madhu and Srsly will catch your eye at markets across the city, and the high quality bean-to-bar chocolate inside will make you wish you bought a second bar.

Lamba Royal Indian Foods has been selling prepared Indian foods and sauces at local farmers markets for years, and the company recently started a snack company called Super Lily Puffs, Austin’s first puffed lily seed company. These irresistible little popped seeds at first reminded me of popcorn, but now I crave this protein-rich snack all on its own.

The Mediterranean Chef is another Austin brand that’s been around for years, selling babaganus, dolmas and tabuleh at local stores, but it is the company’s Grandma’s Humus that elicits “OMG, I love that stuff” every time it comes up in conversation. You can find it at dozens of Central Texas stores, from Royal Blue to Central Market. Zilks Foods makes a pimiento cheese that’s worth seeking out at Whole Foods. For dipping, you’ve got to try the crunchy, tangy Sourdough Project crackers.

When it comes to queso, it’s hard to beat Kerbey Lane’s product, which is available at Whole Foods, but my personal favorite is from Austin Slow Burn, one of Austin’s long-running food brands. Started in 1996, Austin Slow Burn has been a staple at the Austin Chronicle Hot Sauce Festival, and its queso is for sale at Central Market, H-E-B, Fresh Plus and dozens of other Texas outlets. If you’re looking for vegan queso, try one of the flavors from Credo Foods, a fast-growing plant-based dip company that launched in 2019.

Few Austin food companies can claim the same success as Siete Foods, which launched in 2014, got a $90 million investment last year and now sells an array of products at stores from coast to coast. They built the company on grain-free chips and tortillas, but their vegan queso, seasoning mixes and hot sauces are equally as good.

Ana’s Salsa has been around since 1997, and it’s my favorite local salsa on the market. (The best place to find it is H-E-B.) Ana’s is sold in the refrigerated aisle, but if you’re looking for something shelf stable, check out any of the many varieties from Jardine’s, another longtime Austin food brand. In a taste test in the Statesman office, Jardine’s Homestyle Mild was just one spot behind Ana’s. For straight-up hot sauce, I always go for Yellowbird, the Austin-based company with about half a dozen different sauces that aren’t overloaded with vinegar.

Clean Cause, sparkling yerba mate tea that raises money for scholarships to help people pay for recovery living, and Waterloo Sparkling Water are two of the biggest bubbly brands in Austin right now. Clean Cause, which launched in 2017, will be in 25,000 stores by the end of the year, and Waterloo, also founded in 2017 and now available in 130,000 stores, recently sold to a national investment company.

On the non-fermented side, drinks you should know about include Jeany’s Ginger Elixir, a Caribbean-inspired fresh juice company, and Stoke Cold Pressed Juice, which are both available at the Barton Creek Farmers Market, among other places. For a sip of one of the newest functional beverages to come out of Austin, check out Bhoomi, a cold-pressed cane water elixir with Ayurvedic properties, and Mayawell, a low-sugar prebiotic tonic made with agave.

Austinites have a lot of choices when it comes to pickles and other fermented products, and at the top of my list are the pickled vegetables (any of them) from Barrel Creek Provisions, as well as its Gut Love probiotic juice. A close second are the award-winning pickles from The Pickle House, a restaurant near Dripping Springs whose products are now sold through Central Market, Whole Foods and Wheatsville. Boulanger Fermentations makes a variety of sauerkraut that you won’t want to pass up at the farmers markets, and Casper Fermentables also always has interesting fermentation products to try.

Despite a family medical emergency, ‘Ya Fav Trashman’ holds a food drive for Philly’s frontline workers as COVID cases rise

Sun Oct 11 , 2020
Terrill Haigler, more widely known as Ya Fav Trashman, the Instagram account he created to plead for hazard pay, masks and gloves for sanitation workers amid the coronavirus pandemic, continued his generosity Saturday as his mother fought for her life. Haigler hosted a food drive for all frontline workers […] 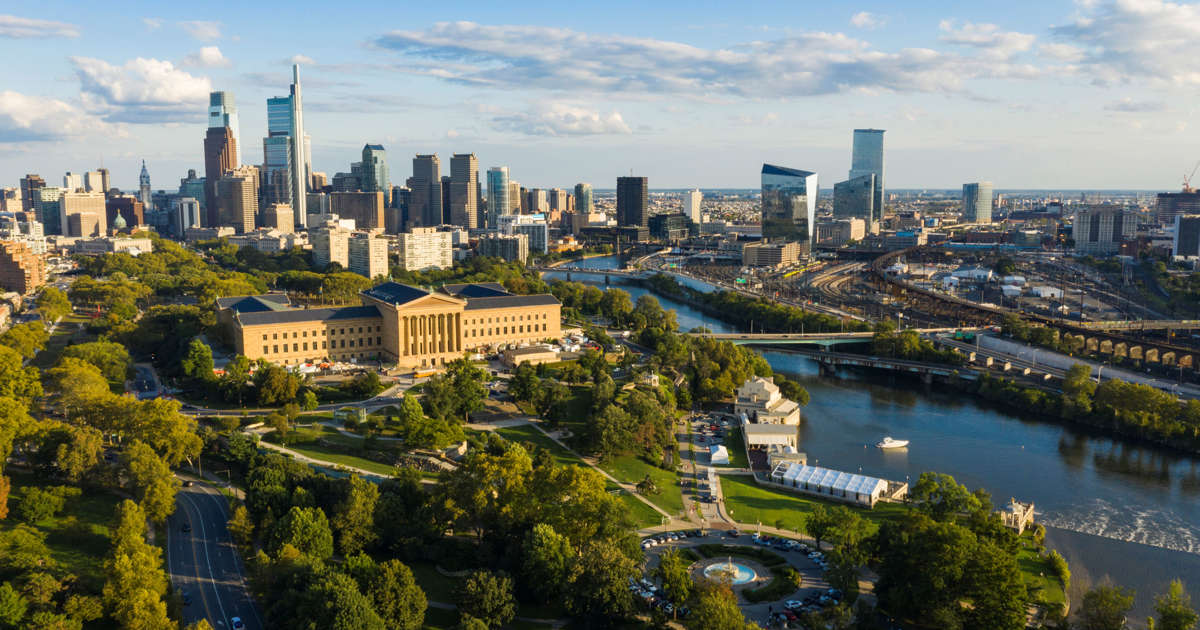