People enjoy food at a Chinese restaurant named “Ginyaki” in Islamabad, capital of Pakistan on Oct. 7, 2020. (Xinhua/Ahmad Kamal)  Muhammad Ahmed, a resident of Pakistan’s federal capital Islamabad, was enjoying a bowl of vegetable and Hunan beef chow mein with his family in one of the most popular Chinese […] 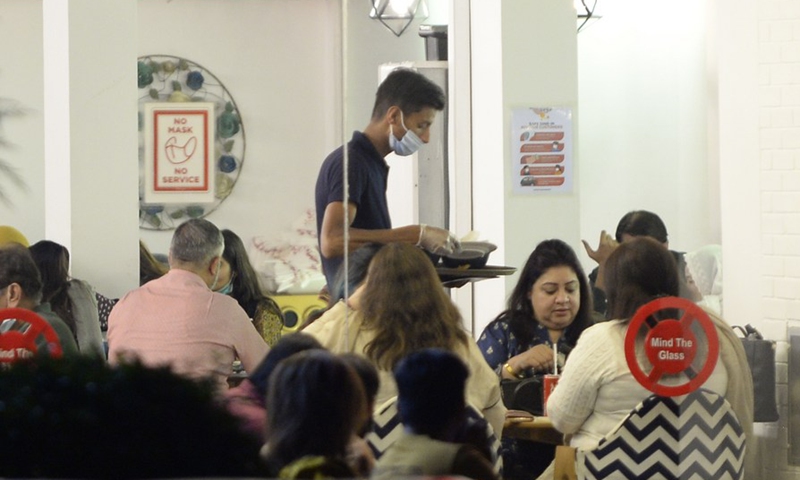 Muhammad Ahmed, a resident of Pakistan’s federal capital Islamabad, was enjoying a bowl of vegetable and Hunan beef chow mein with his family in one of the most popular Chinese restaurants in the city, after waiting for one hour to get a table.

“Ginyaki is full of Chinese food lovers especially over the weekends and diners have to get reservations well before time to avoid any hassle. My family mostly prefers to have Chinese food whenever we are craving for some different food, as it is unmatchable as far as the amazing taste and health benefits are concerned,” Ahmed told Xinhua.

He said he has been to China several times due to his business and found the taste of the Chinese food served in Pakistani restaurants more or less the same as the authentic Chinese cuisine, but there are also some restaurants where chefs choose to give the oriental dishes a touch of local taste to satisfy visitors’ intrinsic buds. The colossal range of different varieties in beef, mutton, seafood and vegetables is the reason behind locals’ fondness for the Chinese food, said another diner Ali Malik, adding that some eateries also offer chopsticks and play Chinese music in the background to give an impression of the Chinese style which is absolutely mesmerizing.

Naveed Illahi, an official from the Capital Development Authority of Islamabad, told Xinhua that there were only a few Chinese restaurants in the city before 2015, but with the implementation of various projects under the China-Pakistan Economic Corridor (CPEC), the capital has seen a spike in the number of Chinese restaurants and guesthouses which also gave a boom to local restaurant industry.

There are around 30 Chinese restaurants in the capital at the moment, the official said, adding the popularity that the distinctive and flavorous Chinese food is gaining in Pakistan is a sign that the CPEC is more than trade and investment. 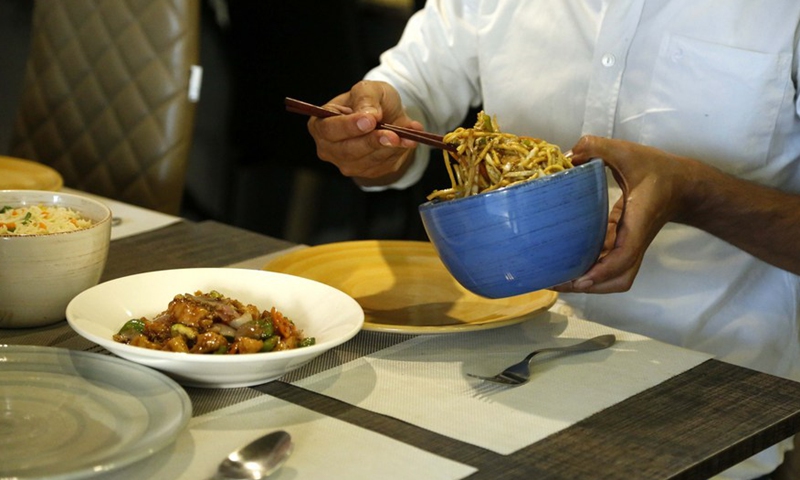 A man enjoys Chinese food at a restaurant in Islamabad, capital of Pakistan on Oct. 4, 2020. (Xinhua/Ahmad Kamal)

An increase in the number of Chinese nationals in the country due to CPEC or other business ventures and more Pakistanis travelling to China in recent years have played a vital role in enhancing popularity of Chinese food in Pakistan, according to Pakistani businessmen in the restaurant sector.

“I did not see such an immense demand for Chinese food in the past. Besides providing great economic and social opportunities for the people of Pakistan, CPEC has also opened a way for the introduction of Chinese cuisine in the country and thus giving a boost to the local restaurant industry as well,” said Nisar Hussain, the owner of a Chinese restaurant in Islamabad.

There was a need to establish more Chinese restaurants to meet the demand of Chinese and local citizens in major cities of Pakistan including Islamabad, Lahore and Karachi, Hussain, who has been in food business for more than one decade, told Xinhua.

“Considering the perks associated with it, I opened my own restaurant several years back. I started from scratch as a chef in another Chinese restaurant in Islamabad and now I have my own setup. Today, I am able to secure a sound and sober livelihood for my family and myself,” he said. A chef prepares a Chinese dish at a restaurant in Islamabad, capital of Pakistan on Oct. 4, 2020. (Xinhua/Ahmad Kamal)

Even during the lockdown period due to the COVID-19 pandemic when all the eateries were closed for dine-in across the country, the sales via home deliveries and takeaways remained unabated, the restaurant owner said.

To express his adoration for China and the Chinese people, Hussain said he has given his restaurant a Chinese name “Xinhua” meaning “New China.” He said the name also attracts lots of customers having love for traditional and authentic Chinese food.

“Love and passion for Chinese cuisine is not just limited to Chinese or Pakistani nationals as our restaurant also entertains many customers from various countries around the globe. The taste, quality and nutritional value of Chinese cuisine are much more as compared to any other contemporary cuisine,” said Hussain.

50% tax on sweetened drinks in Oman from October 1